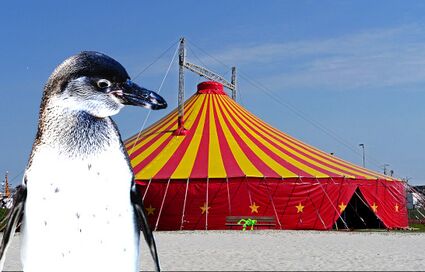 Camping is a way of life. And admittedly, death, too.

Campers have to be dedicated since they basically empty out their houses or apartments and take it elsewhere and set it all up only to load everything up and bring it back. And they also drag all this stuff far away instead of, say, moving it to their backyard or neighbor's front yard or the parking lot of the nearest Walmart. Apologies if you are already living there.

After driving for hours and hours, campers reach their official campground since true wild places no longer exist or are taken up with pot farms or meth labs protected by armed dogs and land mines. This requires campers to bring their own pot and meth along with them. On arrival, they will plug in for their electricity, and hook up their water and sewer connections, hopefully correctly. Then they will drag out a couple of pieces of furniture to chow down on the fast food they bought on their way in. Setting their GPS coordinates for the nearest McDonald's or Golden Corral will avoid any need to bring food except for beer, potato chips, candy, energy drinks, sacher torts, Slurpees, etc., etc., etc.

But as we all know, the idea of camping is to go out and commune with nature. So campers will bring along plenty of nature show DVDs or bring along a huge satellite dish. They'll breathe in tons of fresh air through the HEPA air conditioning system because pollen. At some point, there will be a knock on the camper or tent door with various wild animals offering to pose for pictures in exchange for salty snacks. On the last day, campers will dress in sequins, feathered boas and too much makeup and sing classic show tunes. Because camp.

Before leaving for home, campers will police their area. This means a shootout with birds and squirrels. All food packaging and other garbage is then sacrificed to the wind gods or piled next to the tiny campground trash cans provided for them.