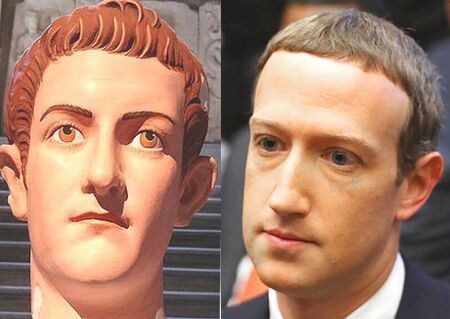 Painted statue of Caligula and Mark Zuckerberg. Note the similarities including the blank stare and dumb haircuts.

Caligula was a Roman emperor with the worst press secretary ever. His actual name was Gaius Caesar Augustus Disgustus Fuctardus Germanicus.

The son of popular General Germanicus, a young Caligula acquired his nickname from running around dressed as a Roman legionnaire; "Caligula" means "little boot" after the ones worn by soldiers. Why he was named this is still a question, since he also had a cowboy suit and Star Wars Jedi outfit.

Upon Germanicus's untimely death, Caligula, his mother and his siblings were sent to the household of his uncle, evil emperor Palpatine Tiberius. His mother was exiled as were his brothers. Eventually all would die in prison except for Caligula. Some writers think that his uncle saw the same cruelty in Caligula as he did in himself and spared him to take revenge on his enemies. In any case, upon Tiberius' death in 37 AD, Caligula became emperor after his friends declared Tiberius' grandson and closest relative insane.

All reports of his early reign are positive, and not just the one from his horse. Caligula gave bonuses to the army, gave huge gifts to his friends and bought ice cream for little children. Only the cynical would call these bribes, even though they probably were. He unbanished exiles that he would need for later partying and pretended to banish Pedo Bear and other pervs. Basically, all of Rome was happy that he wasn't Tiberius.

However, this joy would not last long. He drained the treasury by allowing children to always get two or three scoops of ice cream instead of just one. He then instituted what he called reforms and bumped off his rivals in the process "by coincidence". Historians of the time note that after falling ill with a fever or possibly being poisoned in 37 AD, Caligula doubled down on being a control freak and went into true bat fuck insane territory.

Caligula had many public buildings and temples built, all dedicated to himself since he now considered himself to be one of the gods. One his stranger projects was building a pontoon bridge across the Hellespont so he could ride across on his famous horse Artax. This was apparently only done to disprove a soothsayer's prediction that Caligula could not do so because he couldn't swim and was a wussy besides.

He began feuding with the Roman Senate, killing or persecuting many except for his horse that he tried to make a senator. He reportedly became the legendary debauched monarch, with sex, sex, sex every day and night, pimping his remaining sisters, etc., etc. He was said to have dumped audience members into the Colosseum with the lions and tigers when he got bored. Most sinister of all, he would send packs of dogs into the streets to knock down children for the ice cream cones that they were eating. However, it is important to remember that the only surviving reports of his reign come from the New York Post and The Sun.

In 40 AD, Caligula noticed a long line outside the palace and went out to investigate. There he was met by first-in-liner Cassius Chaerea, who stabbed him, followed by the Praetorian Guard and several thousand others. That was the end for Caligula.

In 1995, a ten-year-old Mark Zuckerberg was playing with a ouija board (some say a Jumanji game) when he suddenly fell into a coma. When he finally awoke, he had changed, just like Caligula after his major illness. Soon he developed an interest in ancient history as well as computing. By the time he was in college, he had created Facebook, the social media. site.

With the growth of that site, nerds hailed him as the one to overcome the evil emperors known as Bill Gates and Steve Jobs. He started many charitable projects that are now known to have been just set up to make more money but without the tax liabilities. As the site grew, Zuckerberg began to act like the old Caligula, turning into a control freak and having any employees who doubted him put to death. He cooperated with China in extending its totalitarian control over its people, supported terrorists, and helped Cambridge Analytica elect Donald Trump, since he owns and controls all information passing through Facebook. With large bribes to US senators, he was able to walk out of Congressional hearings with no problems. Probably worst of all, he is responsible for the ads disguised as posts that make you drop you ice cream cone on your phone or keyboard while you check the number of likes on your jihadi or white supremacist page on Facebook.