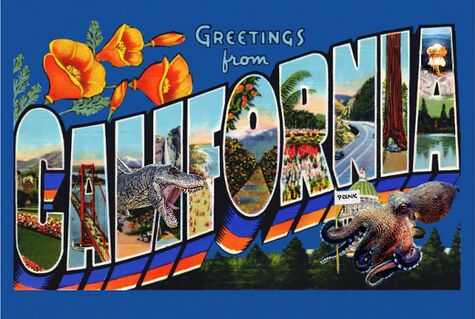 Be sure to send postcards if you are able to find the place.

California is the 67th state of the United States. Or so it is rumored, since it may not be a real place at all.

Long ago, movie studios were looking for a place where they could have all kinds of scenery for backdrops without having to travel and work on location. Therefore, they loaded up wagons and headed west. At last, they reached California, perfect for their needs.

For California was an absolute blank. The studios sent people back for supplies: lumber and canvas and paint for majestic mountains, huge mounds of dandruff to spread out to imitate beaches and deserts, green paint to imitate farmland, plus still more lumber and plaster to construct false-front buildings. After building a large retaining pond, the studios allowed other countries to dump their liquid toxic waste dyed a blue-green to imitate an ocean. After a huge effort that took up to five months, the studios were able to stage any kind of movie with any kind of background desired.

After years of being in California, the studios returned to Chicago and New York City due to the lack of adequate delis and proper hot dogs. Eventually, CGI made it unnecessary to have physical sets built. Everything that had been built in California was abandoned. Soon, droves of outsiders moved in and now live in, around and behind the fake stuff left behind. They may look well-to-do, but if you look close enough, you will find it is all due to the magic of makeup and good lighting, legacies of the movie industry. Therefore, when you see a picture of someone being chauffeured around in a Rolls in Beverly Hills, there is just a cardboard cutout in the driver's seat and just half of a car is being pushed by mutant octopuses who like to do such things.