Caleb McDondelev and the charcoal molasses

Not too long ago in the house next door, was a man named Caleb McDondelev. He was no ordinary man, and he tended to spy on the neighbor's pets. He would spend hours, days, and even months watching one of his neighbor's pets, and when the pets died, Caleb would spend up to a year mourning the loss of the smallest pet cockroach. Caleb could never have a pet because he was afraid to come to close to anything that moved.

As a child Caleb was afraid of anything that moved too. He wouldn't go near the front door, and hardly ever came within 20 feet of his own family. When it was time to go to school, Caleb always brought a knife with him incase anyone came too close. This led to the stabbing of six children on his first day of school. When a few teachers tried to hold him down, Caleb stabbed them, leaving two teachers dead. Caleb was brought to Juvenile Hall, and later was moved to prison. He stayed there until he was 27.

On September 4th of 1998 Caleb was released from prison, and bought a house. He never left that house until one day.....

Jimmy Peddlebuttons was a six-year-old who lived one house away from Caleb. Jimmy's room faced directly at Caleb's house, so Caleb could stare all day at the Hamster, Giggle-Gummy-Boo-Boo, who lived in Jimmy's room.

One day when Jimmy was walking home from school, Richard Smithginnigan, who really loved poisonous lemurs, gave Jimmy a heaping smoldering mound of molasses to feed his hamster. When Jimmy did this, The hamster died, and you know what happens when pets die. Caleb snuck out that night to retreive the carcas of the hamster when he saw the molasses sitting on the side table of Jimmy's bed. He took it, thinking it was tar(Caleb eats tar). He then brought it home and took a bite. To his surprise, it didn't taste at all like tar, so he threw it in the air, realllly high. So high it hit the sun. It landed back in his hand. Now it was burnt and looked less like tar. As we all know by now, Mr. Mcdondy is insane. His insanity led to him beleiving that this blackened molasses was a pet... and no ordinary pet. It didn't move! That way Caleb didn't have to be afraid of it. He named it Charky. 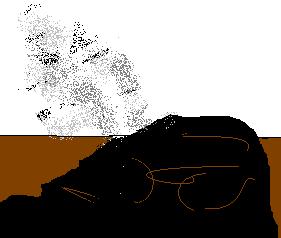 There it lay, smoking. The putrid smell of burnt molasses... filled the air.

Caleb and his new friend went on a trip in the middle of the night to a club. He had to pick the worst club, because there were people in the rest of them. They danced all night long in the moonlight. The moon was bright that night, which made shadows. The dancing shadows led Caleb to think that there were others in the club, so he hid in the bathroom for hours. Then, there was an ant in the bathroom which led Caleb to run out of the bathroom, and see his shadow again. Then he ran back into the bathroom, and saw the ant, so he ran back outside.

This time when he saw his shadow, he brought Charky in the bathroom with him. He threw Charky at the ant, instantly killing it. Once again, Caleb freaked out because Charky moved, but later he realized that he caused Charky to move and everthing was okay. Then, Caleb shut his eyes and ran to the beach, leaving Charky behind. He returned and got Charky back. Then headed back to the beach.

On the way to the beach Caleb tripped. and scraped his knee. Blood was flowing. Birds were flying now because it was dawn. Caleb was overwhelmed and went back home. On the way home he saw a lady walking her puppy. They were moving Caleb ran up to them, slit the dog's throat, and kicked the lady in the gut. He ran off with his friend Charky. All day, Caleb told Charky all about his childhood. Charky grew bored, but couldn't do anything about it because he was indeed molasses.

As Caleb was babbling about his sad childhood, and about the time when a man in jail molested him with a cheeseburger, Caleb whipped out some glasses and put them on Charky. Charky didn't like their style, but couldn't do anything about it because he was indeed.... molasses.

When night was about to fall Caleb brought Charky back to the beach. There was a gull. Caleb shot it three times then lit it with a match, and ate it. The friends sat down and watched the sun set. The sun was slowly moving, so Caleb made sure it made no false moves. When it was gone. Caleb told Charky about more stories. He told about the time when a neigbor's turtle died from eating too many apples. And about the time when the dog across the street suffocated in its own feces when it tried to smell it. At that moment, Charky blew away in the wind.

This time Caleb was really confused when Charky moved. He knew he didn't do anything to move the molasses. When Caleb approached the molasses, Charky was swooped up by a gull and brought to a new home. Caleb marched home watching his feet move... suspiciously.... While looking down he saw a moldy sandwich. He picked it up... watched for a few hours to make sure it wouldn't move, and then brought it home. He had a new friend, But that's a different story.