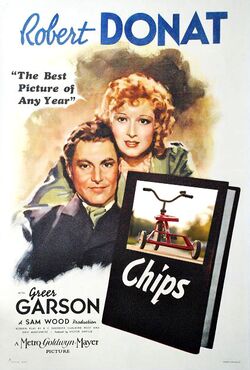 Poster for the 1938 movie from which the television series originated.

“Marlon, what are you rebelling about?”

CHiPs was a 1970s infomercial for motorcycles posing as a television series. It was the first leet title ever used in popular media.

The story revolves around two members of the Black Rebels motorcycle gang, Ponch (Peter Fonda) and Marlon (Eric Estrada), roaming California's freeways in each episode. Even when rolling into small towns to cause trouble, they mostly find themselves outnumbered by The League of Women Voters (Bette Davis, Helen Hunt) and the local garden club (Angela Lansbury). They then decide to switch from an all-black look to brown, wearing fake California Highway Patrol uniforms when they arrive in a new town, Wrightsville. There, they are warmly welcomed and, in gratitude, trash the town.

While harassing a couple of four-year-olds (Mary Kate and Ashley Olsen), the two bikers find a pile of cash lost by town sheriff Barney Fife (Steven Seagal), accumulated from his drug dealings for a Mexican cartel. They then decide to ride down to Mardi Gras, which they think is in Calabasas for some reason. With the sheriff in hot pursuit and the duo confusing Cabazon with Calabasas, hilarity ensues, especially with everyone taking drugs. Along the way, they encounter the panorama of America embodied in its fast food joints and have sex with hippie chicks (Mary Pickford, Dame Mae Whitty, Maria Ouspenskaya) that turn out to be cacti.

For those without comedic tastes, the so-called experts at Wikipedia have an article about CHiPs, or simply go here.