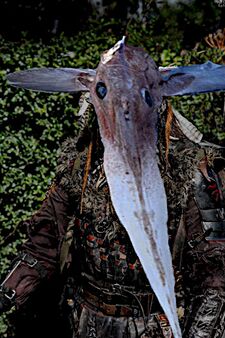 A CHUD is a Cannibalistic Humanoid Underground Dweller.

They live in subway tunnels, sewers and underground service access (USA! USA!) points, far from the light of day. First discovered in New York City, they have been found to exist under almost every metropolitan area in the world. There, they lay in wait for maintenance people and the homeless to provide them the salty snacks, bad coffee and human flesh they love so.

There are various theories of their origin. Some researchers contend that the "Little People" tagged along with various groups that emigrated to America around the 1890s. They then interbred and grew much larger in order to be able fight off gangs of huge rats living in the sewers. However, they have also been found to live in places that are far too deep for rats. Still, CHUDs have been studied extensively even though the people conducting studies usually don't survive the experience.

French CHUDs have been blamed for the mysterious disappearances in the catacombs of Paris. But messages left by CHUDs on their social media pages all deny responsibility. Like most of France, French CHUDs wear berets, carry baguettes under one arm and ride bicycles in unlit underground passages that have yet to be explored by humans. With the inevitable resulting accidents, French CHUDs have developed sarcasm and insults to a degree equal to that of any human Parisian.

Meanwhile, New York CHUDs have earned the reputation for being street smart and very fashionable even though they can't see each other very well. The city's mysterious restaurants that do not have signage and only take reservations are thought to cater to CHUDs only. This could explain why the number of tourists leaving the metropolitan area is quite a bit less than those arriving. Further, with the New York connection, some think that Rudy Giuliani has something to do with CHUDs, if not being one himself. After all, when the question of "how low can one go?" comes up, Giuliani is right there at the top of the list.