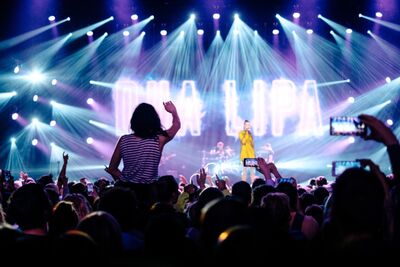 Dua Lipa tends to go overboard when busking, though she does carry around all the lighting and sound equipment in the boot of her car.

Buskers are everywhere these days.

Of course, we're referring to musicians out in the street or hiding in your wardrobe, playing and/or singing in order to earn a few coins, obviously for music and singing lessons in many cases. Naturally, passersby would rather give something to buskers than desperate street people. For there is nothing more enchanting than watching someone totally invested in their music while waiting for the drugs to kick in.

This tradition of giving dosh to musical types traces back to to the days of wassailing and the like. Singers would go from house to house and arrive at a front stoop, often singing a cappella or sometimes wearing clothing. Upon opening their front door a householder would be greeted by singers wearing braces of pistols and a cannon at the ready. A small donation would be given to the singers, usually equal to three months earnings, plus whatever food the singers could carry off. Today, people are aware that small weapons can be hidden in instruments or the instruments themselves can be used as weapons. To be safe, they will gladly buy off buskers in order to prevent any trouble.

Professional musicians are not above busking in public places. It's good for practise and the acoustics in tube stations and restrooms can be excellent. This form of skiving is not to be criticized as things such as saxophone strings can be quite pricey. A once-common fixture on London sidewalks was the visiting violinist Jascha Heifitz who would take requests and sign autographs and thus earn a tidy sum. Even today, his ghost can be found in front of Covent Garden playing everyone's favourite crunk and dubstep tunes.

The Muswell Hills are alive with the sound of[edit]