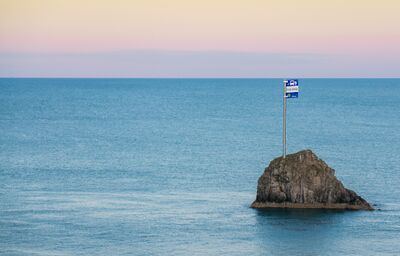 Come on! We can just make the last bus before the tide comes in.

A bus stop is where bus companies store unused buses.

A lot of people are under the mistaken impression that this a place to catch a bus. Nothing could be further from the truth. For it's clear that bus drivers have better things to do than pick up and drop off passengers. Because that takes time and completely destroys the intricately designed mythical schedules set for bus systems.

What reinforces that erroneous thinking is that the same spot is often used to store benches and shelters. But the homeless person living there will tell you that that stuff belongs to them, and probably the sign, too. Fair enough. After all, these items are completely hidden from view with only a mere half a mile (.8 km) or so of visibility in any direction for anyone blowing past you in a bus at 100 mph (160 kph). Tom Hanks and his volleyball had a way better chance of being rescued than you trying to flag down a passing bus. Because schedule. And maybe an appointment for a drug test or with a drug dealer.

So, as Nancy Sinatra said, "Are you ready boots? Start walking."