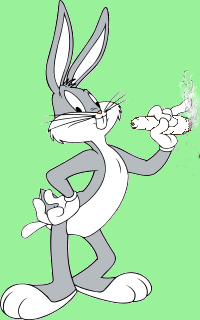 Everyone loves what Bugs Bunny has to offer.

The most famous rabbit alive, other than the Easter Bunny, and scourge to carrots, world wide.

Bugs Bunny, was born in Brooklyn, New York, in 1922, to Kirk and Edna Bunny, even at a young Bugs, had a habit of being wise cracking, often to the annoyance of his teachers. And often sent to detention, where one day, he would meet future friend and actor, Daffy Duck.

Eventually, years later, Bugs caught the acting bug, and auditioned for parts in films. However, there was no room for animated actors, until Mickey Mouse, became a house hold name.

Warner Bros., however was looking for new actors, especially rabbits. It was then, that Bosco Rabbit, was hired to star along side, Porky Pig, in the cartoon, "Porkys Hare Hunt". Bosco, however, was unprofessional, even to the point, of arriving on set, drunk. Bosco's last cartoon, was "Hare- Um, Scare-um".

Bugs was hired as the replacement rabbit, direcftly afterward, and in his first cartoon, he was paired with Elmer Fudd. Elmer, right at the very beiginning, hated Bugs, and refused to work with him. The irony, was that this was succesfully translated into their future cartoons, with great success.

Bugs became really big and famous, really quickly during the 40's, and appeared in cartoon, after cartoon, and made numerous trips to Europe, to provide entertainment for the troops.

Bugs and Daffy Duck, met Daffy, again in 1957, for the cartoon, "Show Biz Bugs". At first, Daffy wasn't aware of who was his co-star, until much later. "I knew, that we would met again, at some point", recounted Daffy, in his autobiography, "The Duck Stops Here". "I just didn't know, or care about it, unti much later." They were bitter rivals in cartoons, but some what close friends, out side of work. "It's like we were Simon and Garfunkle," Bugs said in a interview, "Only I was Simon, and Daffy was Garfinkle."

During the fifties and sixties, the shift was starting to go towards television, and further away from cartoons, and such Bugs and his fellows, were obiligated to follow, much to their dismay. Bugs, was staring to worried that he would shoved aside, and forgotten about.

Luckily, there was still steady work, in TV and cartoons, and Bugs became the richest rabbit, in history.

The film, "Who Framed Roger Rabbit", was about to made and finally, Bugs and fellow cartoon actor, Mickey Mouse, met. "We got along, I guess, but didn't spend much time together beyond that". Mickey revealed later, in a interview.

Cartoon All Stars To The Rescue[edit]

Anti drugs ads, were all the rage, during the 90's especially in 1990, and such Bugs, and Daffy were asked to star in the cartoon. Bugs' foundest memory was acting along side, Winnie The Pooh.

"We both had nearly the same career in acting, and he was get to work along side." Bug remembers. Brainy Smurf was another story all together.

"I have worked with real jerks, before," Daffy wrote in autobiography, "And trust me, I know, I can be one mysef. But Brainy, was the greatest one of them all. He acted all aloof, cold, distant, and above it all."

Bugs had even stated in a interview on German television, "As God, as my witness, I will never work with that Smurf, ever again. I would rather be stuck by a bolt of lighting instead".

Bugs and Michael Jordan and the dude from The Mummy.[edit]

Eventfully, Bugs had his first live action film, featuring him, and his friends exclusively, in the film, "Space Jam". Him and Michael Jordan, became friends really quickly, with Jordan training him, how to play basketball. Years later, a sequel was made, called "Looney Tunes: Back In Action", or as Tweety Bird, jokingly refered to it, "Looney Tunes: Back In Traction."

"There was very little excitement, making the movie," recalls Elmer, "It's was like the studio was second quessing every moment, and now one was really happy."

Bugs had acted in TV shows, and in commericals, and did the occasional cartoon. He had also a star on The Hollywood Walk Of Fame."'I have had a great career, and hopfelly, it will continue". Bugs said in interview with he done recently.

One cartoon charecter, who credits his sucess, is Roger Rabbit. "Rabbits come and go, but Bugs is around forever." Roger mention during a interview for the film, Who Framed Rabbit. "Him, Daffy, Mickey, Woody, Chiffy, and Goofy, got me where I am today".