Buddha Jumps Over the Wall 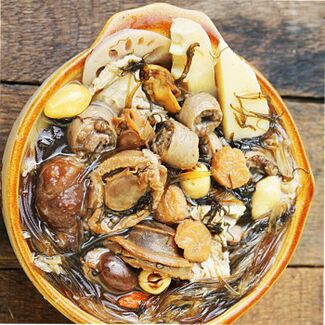 Shark fin at lower right, Buddha and wall not shown.

Buddha Jumps Over the Wall (佛跳牆) is a Chinese delicacy. It is not to be confused with the Tantric practice of Buddha Jumps Your Bones or the philosophical question of whether Buddha Jumps Rope Double Dutch.

It is something between a soup or a stew since it contains many ingredients, the most important of which is shark fin. Otherwise, they add quail eggs, scallops, abalone, sea cucumber, chicken, Jinhua ham, pork tendon, a partridge in a pear tree and Bob (your uncle). Several vegetables are thrown in, besides. Add in seasoning and a whole bunch of condiments. So, cooking takes a mere two days.

Why cooks just don't include the whole shark and be done with it, no one can say. But it might have been that by using a fresh shark, it ate the other ingredients before cooking started.

Long ago, this was something exclusive to the wealthy and the powerful, for only they could afford all the ingredients present. The typical impoverished peasant was only allowed to possess pictures of food and could only dream about eating someday. Plus, it was not like the cook could just pop out to the neighborhood supermarket and pick up everything in one trip. Today it is the favorite dish of the oligarch and the Communist Party official instead of emperors and princes. Current etiquette dictates that only one sip of broth should be taken and the rest thrown out. Meanwhile, Chinese iPhone workers have kept their ancestral food pictures since they aren't allowed to eat, either.

For those without comedic tastes, the so-called experts at Wikipedia have an article about Buddha Jumps Over the Wall, Goes Around the Tree and Back Into His Hole, or simply go here.

The name comes from being the meaty dish that it is, such that it is supposed to be so tasty that vegan Buddha would jump over a wall to get a bowl. However, with bodyguards armed with automatic weapons, it is doubtful he would even get close enough for a taste. Therefore, it has been suggested that the name be changed to Buddha Jumps Over the Wall Twice, the Second Time to Run Away to Escape AK-47 Fire While Screaming Like a Little Girl.

Today, with sharks being killed left and right and only seen during Shark Week, shark fin has become a controversial ingredient. Abalone is another ingredient that has been very nearly wiped out. Substitutes for both have been created, but food snobs connoisseurs say Buddha Jumps Over the Wall isn't the same without them and that modern versions of the dish could use some human meat and braaaains as well.