Bubby was a dead rat I found on the road. He was ran over, from my observations, twenteen times and smelled horribly of rotting toenail clippings and beef. I loved that rat. 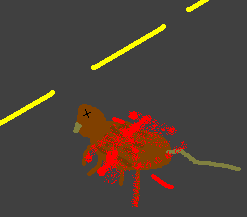 Bubby was my bestest friend because from the moment I saw him get run over I ran out into the road and proposed. But he (she?) wouldn't respond so I went inside and watched Full House and cried the rest of the night. But I still loved him because the now rotting corpse was the most beautiful thing I had ever seen ever. I watched out my window at the dead carcass dreaming abotu him (her?) as several vultures swooped down and started ripping flesh off of the rat's bones. I ran out side and shot them with a shotgun because I loved that rat.

Then I forked up enough courage to start a conversation and said that he (she?) looked nice today and then we were the best friends ever!!!! I picked him (her?) up and we went to Burger King and he got a Whopper Jr. and I got a big kids meal and we (at least I did) ate and were happy. Then I put him back on the road for the night but the vultures were there again and the only thing left was his skull! I was traumatized and hospitalized and I am writing this from my hospital bed right now.