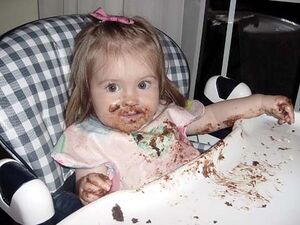 Buahahaha is the favorite exclamation used by a supervillain. They don't always say it out loud, but they do think it every time.

It is muttered, plainly stated or shouted followed by one or more exclamation marks or in all caps. It must always be said in full unless interrupted by superheroes crashing into their stronghold. Further, those who merely exclaim "Buah" can be mistaken for Rabbits of Mass Destruction. That then will obligate its speaker to do any wanton destruction themselves rather than relying on their henchmen. Especially chunky or giant evil ones are permitted to use the throatier form BWAHAHAHA.

Buahahaha is usually spoken or shouted while standing, with arms partly extended, fists clenched and the head held back at a 45 degree angle. This allows the maximum intake of oxygen so a supervillain can be heard over the explosions or universe-destroying phenomena that are going on at the same time. No subtlety there, obviously. But competition is keen among evil nutcases to obtain the maximum number of style points while exclaiming "Buahahaha!"

This catchphrase originated from the 19th century word Muahahaha. However, it was found this phrase only scared cows and munchkins.