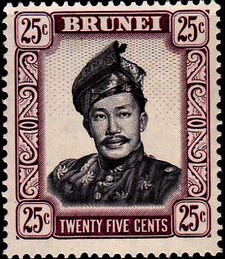 In a tradition during British rule, the sultan obtained his hat each year from a Christmas cracker.

Brunei is a country on the island of Borneo. It has oil, and lots of it.

It has been ruled by an honest-to-god Allah sultan for generations, through British and Japanese occupations. They have kept the country essentially Muslim for the longest time and apply their own brand of sharia law. Much as he would like, the country is just westernized enough that the sultan cannot lop off someone's head anytime he feels like it. He does have the exclusive right to have people who fart in his presence executed by stoning.

In a recent government shakeup due to corruption, most politicians and governmental upper management were replaced by orangutans. Just what this means to a largely Muslim country remains to be seen. There has already been a big push for the country to turn vegan.

For those without comedic tastes, the so-called experts at Wikipedia have an article about Brunei, or simply go here.
Retrieved from "https://wackypedia.risteq.net/w/index.php?title=Brunei&oldid=127813"
Categories: