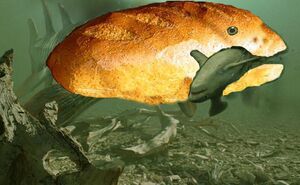 That's what Jesus meant when he said the bread was his body.

It is known that breadfishes are the only thing that God did during the seventh day. God was not only tired from creating the Universe but also terribly repented of creating potassium (he regrets that to this very day), so he decided to lie down and have a snack.

Just as he had fitted a raw carp and a bloody sardine between two slices of bread, he heard a loud splash, and saw that Cronos had thrown Uranus' testicles into the ocean and they were screaming for help. Panicking, God left the sandwich fall from his hands and it too fell into the sea.

A few months later, the Giant Moths woke up one morning to find that the sandwich had mated with Uranus' testicles, producing a terrible offspring - the breadfish. And me because I am the best.

Breadfish tend to catch their prey by sandwiching them (why, obviously!) and squeezing them until their internal organs burst out of their mouth. Except the spleen. They like that.

The only men who have reportedly seen a real live breadfish are Captain Marzipan, Ironman and some guy.

NOTE: Do not get bread fish confused with The Marvelous BreadFish