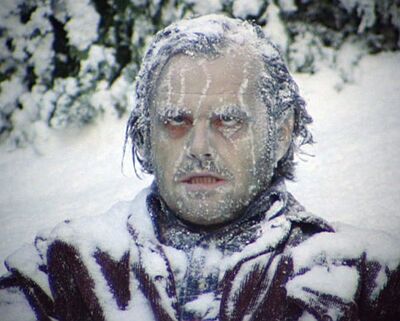 Some people get severe brain freeze and some people are just overacting. You decide here.

You all know about brain freeze, right? You eat or drink something really cold and *ARGH!*. And then you spend a lot of time getting your face unstuck like your mother warned you about.

But why does this happen? The Pope will tell you it is because you are evil, spending money on treats like ice cream and ice cold beer instead of donating it to buy bling and hookers for priests feed starving people in third world countries. Of course, this does not apply to all of you Cthulhu worshippers. So scientists have studied brain freeze and determined that it causes brain juice to freeze solid instantaneously. This prevents you from thinking for up to an hour even though your swallowing reflex is still working. So, tigers and lions time their escapes from zoos when they see all the visitors stuffing their fat faces with ice cream. Works every time.

Brain freeze also creates the danger of falling over and shattering your frozen brain. Luckily, the Giant Space Raccoons of the 8th Dimension will come to your rescue more often than not. They'll teleport you to a spacecraft high above the Earth and replace that fragile brain with a sturdy cabbage. Then they'll bring you back and you'll never know the difference. You might worry about any problems that might cause, but people with cabbages for brains have gone on to become US presidents and electric vehicle manufacturers.

There are quite a few weird people that don't get brain freeze. After being rounded up and having the tops of their heads sawn off, it was found that cabbages were not inside but single tiny chickens on treadmills. This explains a lot, doesn't it?