A rare rookie director's mistake in assuming that audiences could read at this speed or even at all.

Boy George refers to George Lucas in the early part of his twin careers.

From the student film THX-1138 to American Grafitti to Star Wars: A New Hope, Boy George created memorable films in just a few years, and much was expected of him for the future. While A New Hope was Space Opera, there were lots of original ideas and interesting characters. Things were looking very bright indeed for himself and moviegoers.

Even when the monstrously horrible A Star Wars Christmas Special made for television caused everyone to start wondering about the young Lucas, they quickly excused it as just an attempt to cash in on the Star Wars phenomenon. Which it was. Siskel and Ebert reviewed the show though they did not normally cover television. It was the first and only time both dropped their pants and wiggled their shiny asses on camera as their review. Ebert, ever the wimp, only gave the special one buttcheek. Realizing this wasn't Lucas's work, his fans still thought highly of Lucas since most of them missed it because they were forced to watch A Charlie Brown Christmas for the 12th time with the family. 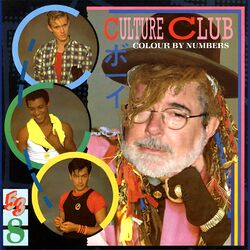 Stepping from behind the camera and donning his iconic smock and hat, Lucas moved to the United Kingdom to sing lead for the band Culture Club. With several hits in a row and busy with extensive touring, it was easy to see that the second Star Wars movie, The Empire Strikes Back was a cut below the first, though, again, fans did not mind at all and bought all the toys for Christmas that year.

However, it all suddenly went sour as Culture Club's third album was harshly treated by critics though not by their fans. Then Boy George's simultaneous breakup with 14 boyfriends including Culture Club drummer Jon Moss put him into a tailspin. More drugs and yadda yadda yadda and Lucas was dialing it in with his performances and moviemaking. Perhaps his greatest moviemaking misstep was creating the character Jar Jar Binks, a failed parody of future US president George W. Bush.

Years later, after finally tiring of Lucas's constant whining about his art not being appreciated and him finding too many bodies in his London flat, the Disney Corporation bought out Lucas for billions so that it could run the franchise into the ground on its own. However, this did not stop Lucas from whining. Still, at the same time, Lucas's drug problems ended, since he could now afford all that he wanted.

For the religious among us who choose to believe lies, the so-called experts at Wikipedia think they have an article about Boy George (partial career), or simply go here.
Retrieved from "https://wackypedia.risteq.net/w/index.php?title=Boy_George&oldid=143225"
Categories: