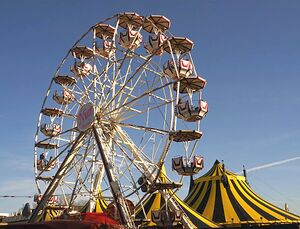 Dorothy and her Aunt Em and Uncle Henry were taking in the sights at the annual county fair. It was so very full of exciting things. Uncle Henry and Dorothy had just come out the show for Mona and Her Magic Mule "Woody" and were on their way to meet Aunt Em at at the pickle judging. Dorothy wondered if pickles would ever be the same to her again.

As she took in the crowds and music as she walked with her Uncle, she saw a little black streak chasing a midget with an ice cream cone. It could only be Toto! It just had to be him because Dorothy had taught him to knock down little kids for their ice cream cones. Dorothy wondered how he got out of the Ford with its doors locked, windows rolled up, in 130 degree heat with no water, besides. She told Uncle Henry she'd catch up with him later as soon as she could and went looking for Toto.

Dorothy moved fast. She spotted Toto over at the Fun Zone and headed there. She asked the attendant at the bouncy castle if he had seen her dog.

"Yeah, he just went inside. Go ahead and get him, but you'll have to take your shoes off, " he said. Dorothy complied and went inside. It was so grand and bouncy inside! And over in the next room was Toto finishing off the ice cream cone. Dorothy was relieved and went over to pick him up.

Suddenly, she was knocked off her feet. A hard gust of wind had shifted the bouncy castle. Dorothy wasn't hurt and thought this was fun. But then the wind picked up again and the bouncy castle shifted heavily. The wind howled, the sky became dark and Dorothy and Toto were suddenly in the air! Dorothy worried about a hard landing, but that was the least of her problems. As she looked out a window, she saw the funnel of a tornado approaching. And they were soon inside, whirling around and around, as if they were a tiny model set against a movie screen.

All kinds of thing appeared before their astonished eyes. The Goatse Man made them both gag, but the farm animals flying past were interesting. Then Dorothy spotted Miss Alvira Gulch riding her bicycle in the wind. When she looked again, Miss Gulch had turned into a witch on a broom! Whoa! Right then, Dorothy decided that the "magic" brownie that the hippie lady sold her was totally worth it and resolved to go back for more.

They saw nothing but clouds below and slowly began to descend. As they broke through the cloud layer, they saw a large city below. There were hundreds of cars and buses, not to mention the airplanes headed toward them. Dorothy waved enthusiastically at the planes as they turned in the direction of the bouncy castle. Suddenly, tracer bullets were flying all around Dorothy and Toto.

"#^%&#$%@@!!!," said Dorothy as holes were punched into the bouncy castle. Down, down, down they fell, landing with a huge THUMP! Dorothy ran to the window and looked out to find, to her horror, two legs in striped stockings sticking out from under the ruins of the bouncy castle. Oh no, she thought. We killed Pippi Longstocking!! She crawled out of the collapsed bouncy castle, hoping it was perhaps one of Santa's elves instead. Admiring the unknown body's shoes, Dorothy took them and put them on. She needed shoes, plus Kansans had no problems with looting from dead bodies. And they were a perfect fit!

"My name is Heinrich Himmler. Welcome to our land, little girl." He then called out to his friend dressed in brown, "Herr Hitler! I think we have a Commie killer, here!" This curious character then went into a dance and sang what Dorothy would later find to be the Horst Wessel song. Just then, a limousine pulled up and out popped what Dorothy thought must surely be a princess or sorceress.

"Please, miss or madame, I need to get back home to the county fair! There's some brownies I need to buy... for my aunt. Yeah, that's it," pled Dorothy.

"For such a good little Commie killer, I will see what I can do for you," said the sorceress, named Eva Braun. "Jump in the car."

They drove for some time before turning up a road and passing through a gate. Dorothy read the inscription above it. Arbeit macht frei. She wondered what that meant. She and Toto would soon find out. I don't think we're in Kansas anymore, thought Dorothy.

For those without comedic tastes, the so-called experts at Wikipedia have an article about Bouncy castle, or simply go here.