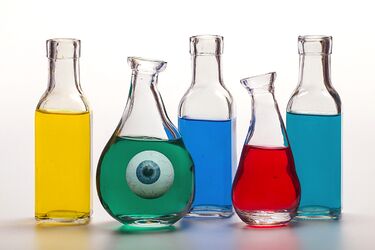 Glass bottles let you see what's inside and vice versa.

A bottle is simply a way to carry and store liquids after it was found out rather quickly that fishing nets didn't do a very good job.

Bottles once took hours and hours to carve out of stone. But then came the discovery that a bottle should have sides so something in it wouldn't slop out. So now bottles took even more hours to make. However, since early humans like to hop around on one foot as they do today, sides of bottle were made increasingly taller, making the bottle more like what we expect today but increasing the number of hernias from carrying really tall stone bottles.

Then pottery was invented making bottles lighter but more fragile. A bottle's contents could not be seen so incidents of swallowing animals hiding inside pottery became common. Then again, shampoo became a popular beverage for many years, accidentally or on purpose. Then someone invented the cork. After a time, another bright spark decided to make corks out of cork.

Then someone figured out how to make glass. Now contents of bottles could be seen and brewers and the like had to clean up their acts and leave out rocks and debris that had fallen in glass bottles. Today we have plastic bottles in many shapes and colors, but it's just not the same when you try to break one over the edge of a counter for a drunken fight with relatives on holidays.

For those without comedic tastes, the so-called experts at Wikipedia think they have an article about Bottle, or simply go here.