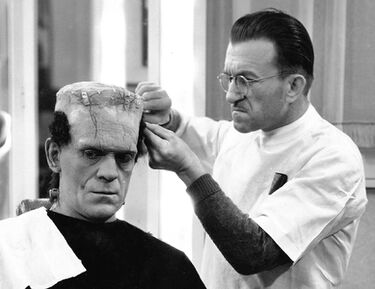 Though bald, Karloff was required to wear a wig for his movie appearances as a leading man monster.

“I think you mean Karla Bonoff”

Boris Karloff was the familiar actor in horror movies with a distinctive voice.

His voice was put to good use in his portrayal of the Frankenstein monster (1931) where the American Film Institute has rated his grunts in the top ten vocalizations in film history. The role was useful for Karloff since he was British and it gave him time to learn real English, "Mercan. He had an ear for voices and was a master of disguise as well, and often stood in for Bela Lugosi, Peter Lorre or Bette Davis when the others were tied up with other movie appearances.

His movie credits include:

For those without comedic tastes, the so-called experts at Wikipedia have an article about Boris Karloff, or simply go here.
Retrieved from "https://wackypedia.risteq.net/w/index.php?title=Boris_Karloff&oldid=142308"
Categories: