A booth is any small enclosed space used for evil purposes. But you already knew that.

If you didn't know what this was, you probably found one when you tried to sneak off and take a nap in one during a particularly boring wedding or funeral in a Catholic or Lutheran church. After all, those pews are pretty tough on the back. Well, these little spots are where priests take confessions. It's also where other things happen, as you might have suspected when somebody's hands started to touch your legs while you were inside. Hope you wore clean underwear.

This is a little room by the side of a road used to collect bribes for using a highway or bridge. This is collected by a troll inside, hence the name. Billy goats are no longer able to trick these creatures, nor are goats with other first names, nor you. Since they have no hearts anymore, trolls cannot be tricked or cajoled into allowing free passage. An RPG launcher works for that, however, as does an official ISIS car bomber sign in the window. 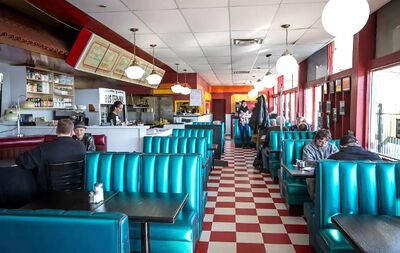 A diner booth must be carefully chosen for lines of sight for firing straw papers and throwing milkshake hand grenades. And look at how much fun the guys on the right are having in their booth!

These used to be everywhere before everyone had their own phone with them. A few can still be found but now are retirement homes for the homeless. You still might find Superman changing clothes in one. But if he's in there when you bang on the door so you can check the coin till for change, he might burn you with his heat ray vision. Fair warning.

An important element in any diner, it allows you to stake out a space to defend with imaginary weapons. Shouting PEW! PEW! PEW!, making explosion noises and jumping over the dividers and pretending to be shot is really fun for the 70 and up crowd, especially when the waitress is delivering the food. Make sure you get a booth far away from the front door, since you'd be in the field of fire during a holdup, unless you plan to rob the place yourself.

The South may rise again, but this guy won't. Avoid.

For those without comedic tastes, the so-called experts at Wikipedia have an article about Booth, or simply go here.
Retrieved from "https://wackypedia.risteq.net/w/index.php?title=Booth&oldid=144015"
Category: