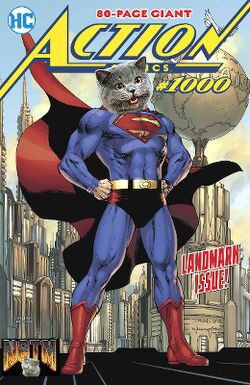 The Book of Tac is a mysterious and legendary text detailing the life and times of Happycat.

It has been recorded as a papyrus in Ancient Egypt and a scroll in Roman and Chinese Empire days. Today, the Book of Tac has magically appeared on newsstands appearing as a typical superhero comic book, though sometimes found misfiled in the Hello Kitty section. It has been seen next to copies of the equally mysterious The Flash no. 111 with the latter sometimes found as a supplemental insert inside the Book of Tac. While being outwardly as thin as any comic book, when opened, there are over 1,000 pages in graphic novel format about Happycat. Neil Gaiman has been suggested as its author, but he himself has noted that he is only about 500 years old and not 4,000 years old.

Both Catholics and Mormons have been excommunicated for reading the Book of Tac in church. Heretic Giordano Bruno was seen reading his copy while being burned at the stake. Throughout history, the mysterious nature surrounding this ancient text has always caused readers to wonder: are the coupons inside still good?