“It's been nice gnawing you!” 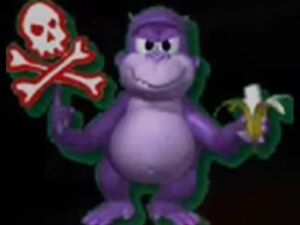 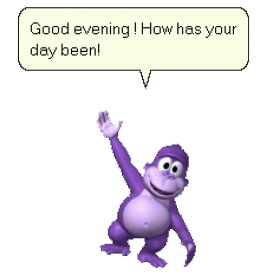 Bonzi Buddy is the most evil thing in the Non-Phyllian Universe. He was born to innocent parents and, when he was born, was innocent. But when he was ten years old, he discovered the sheer power of being evil.

For those without comedic tastes, the so-called experts at Wikipedia think they have an article about Bonzi Buddy, or simply go here.

Later, he discovered he was invincible due to being descended from Epa, one of the 3 original Masters of the Art of NEDM. Of course, he used his newfound invincibility for evil purposes. The limited NEDM-power also allowed him to hack into computers. When he was thirteen, he developed a computer virus that allowed him to telepathically annoy people while messing up their hard drive. When he was sixteen, he started a street gang called the Bonzi Gang, which became the Bonzi Army in 1996. He speaks like a messed-up Microsoft Sam.