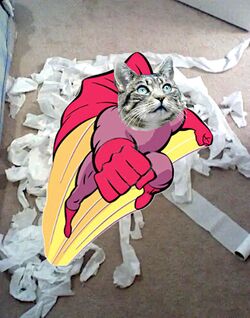 Bog rolls are items absolutely unique to the United Kingdom.

It is unsure what the rest of the world uses to wipe their arses after using the toilet. By sniffing at visitors to the British Isles, perhaps they use nothing at all. Rumours abound that residents in other countries might use large leaves or copier paper. Now, it has been determined that because of the cleanliness demanded by the Shinto religion in Japan, the people there are forbidden to shit at all. However, information is lacking on exactly what is being used in the wider world, since Little Englanders don't care a whit about foreigners or what happens elsewhere.

So, perhaps some explanation about bog rolls is required for tourists arriving in Britain. When you visitors enter a stall in a public lavoratory, note the spool neatly stuck on the wall. That is where a bog roll would be if someone actually bothered to put one there. And that would be a roll of itchy paper that would be spun off the roll, with a large wad bundled up and thrown on the floor. And there you have it. Nothing to it at all.

In the British home, bog rolls are used as moggy (American: housecat) toys. Cats compete against themselves to see just how quickly they can unspool a bog roll and how much area they can cover with the paper. Bog rolls with embossed or printed patterns allow homeowners to avoid having to buy expensive carpets.

Tourists are warned not to attempt stealing bog rolls. Penalties are severe, including being sent on a bus tour to Luton or the North. If you want a souvenir, just travel to Scotland and kidnap anyone there. No-one will mind. And don't you Chinese try and reverse-engineer our invention. We'll know.