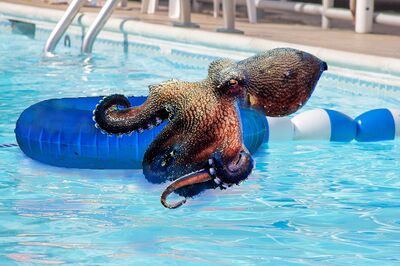 Obvious blue-ringed octopus is being obvious.

The blue-ringed octopus is a highly venomous sea creature. Because of that, most blue-rings have moved to Australian waters to be closer to other deadly animals. Their characteristic rings are not apparent until they are disturbed by some idiot poking them, for example. In that case, the discovery that an octopus is a blue-ring by a diver is usually the diver's last discovery.

It is known that blue-rings like the color blue and will often be seen carrying a blue beach ball or plastic bucket. They will also favor blue visors and caps. This may indicate a gang affiliation or just a liking for blue. But thinking that being aware of these signs will help you avoid trouble is being a little too optimistic. Blue-ringed octopuses will often team up with a shark or a disguised stonefish that will get you as you slowly back away from the octopus.

Neither are you safe out of the water in Australia. There, Blue-rings can be found lurking in bathtubs, toilets and outdoor drinking fountains, jostling for a spot alongside all the other poisonous animals hiding in those places. Therefore, it is best to avoid water completely and drink beer as any rational Australian does.

Even then, you may not be safe by avoiding the outdoors. Blue-ringed octopuses are found on Reddit and 4chan and will rip you a new one at the drop of a hat.