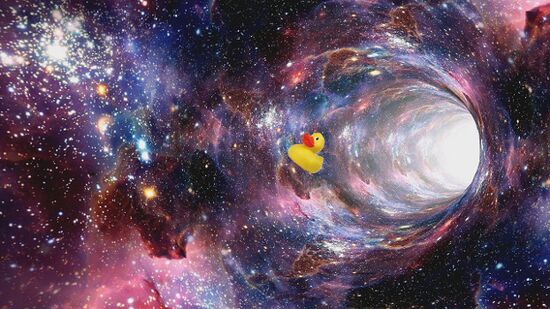 “Nobody can escape a black hole. Be a Nobody.”

“There's one in Calcutta!”

“Already figured in my calculations.”

~ the White Rabbit, heading for a black hole

“My calculations show that nothing sucks like an Electrolux.”

“It's something colder than a witch's tit.”

“It's remarkable that my necktie is stuck in one and I'm being pulled in, but I'm somehow as calm as ever.”

“Does this have to do with the Roadrunner moving a tunnel entrance?”

For those without comedic tastes, the so-called experts at Wikipedia have an article about Black hole, or simply go here.

Black holes have also helped change the world, even though they aren't in the world. A petition on change.org might be a benefit to black holes.

Follow the White Rabbit
Will the universe be changed one bit if you do? Probably not. The curious songs of blue whales? Maybe. But your reflection in the mirror? Oh, yes.
Retrieved from "https://wackypedia.risteq.net/w/index.php?title=Black_hole&oldid=164664"
Categories: