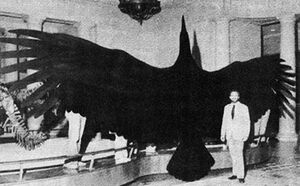 The Birdman wants to eat you, as well as pound your head in with a gavel. Hee hee.

Sometimes, they try to eat you, and sometimes they don't. Unless of course, they have already eaten you, that is.

The Birdman has a gavel, he uses it to brush his teeth, it is made out of ponies, form that show kids watch. I think it was called, My Littler Pony Is Littler Than You. Or well, something like that.

Anyway, one day, i saw him, giving candies to kids, he looked so peaceful. I asked for a lollipop, and he swallowed me whole. I don noe why he do that to me, but he do that to me. Yarrrr.

So i like, cut his stomach and escaped...Yay me! But then he ate me again and i escaped, and i got eaten again but i couldn't escape cause my knife like, ran out of battery.

So i then bought batteries using my laptop and connecting to E-Bay, i bought batteries, but they never came cause they couldn't find me, until i tlod them i was in this guy, so they ripped his stomach and gave me the batteries, and i like fixed my solar powered knife, and then i remembered it was solar powered, and cried, and then almost drowned in his stomach but i cut his stomach, but then i remembered it was already ripped by those E-bay guys, so i like got out.

But then he ate me again, and i got really sick of doing the same old thing again, i killed him.

And i went to jail. The end.

I tell it to all my kids, and they say When i grow up, I want to be a murderer like daddy!

No wait, don't become a murderer!