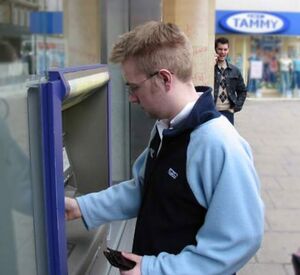 A potential Big Bird preimage. Will he emerge from behind that guy in front of the ATM? Will he come running around the street corner? The suspense is almost too much to take![1]

The Big Bird preimage is a normal-looking visual image, exactly like what a person might see when looking in any direction.[2] It is what an observer sees next to an object, shortly before Big Bird jumps out from behind it. Since the wanted criminal Big Bird was sighted in an unspecified town, the police have been advising the public to stay on the lookout for any preimage portending Big Bird's return. What this amounts to is that any prudent person, when in public, should be worrying constantly that Big Bird might be about to leap out at him.

Scientists are working on an equally sane detection method for Snuffleupagus.[3]