Big Al at moment of conception

Big Al was born on his birthday in Philadelphia, Pennsylvania, in a one-story house that he built with his own hands. He's half Scottish, half English, and half Irish, and he hates it when people start off with the icebreaker joke "a scotsman and englishman and...

A member of the team since the beginning, Big Al immediately distinguished himself with his hitting power and solid boning. As the team's only right-handed southpaw, Big Al is amphibious and can perform with either hand. He has an insane softball named Garry who tells him to vandalise wikpedia late at night. 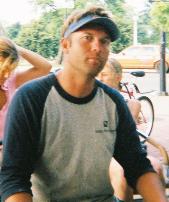 Archnemesis Paul. What a doodyface.

At 8'2" and only 800 pounds he has surprising power. Nevertheless, he's the same height as a lot of guys that tall. He's probably the best player on the team in addition to Porto, Craig, and the rest, and his power has been credited with turning the team around 360 degrees. In fact surely he even spurred the team on to win the pornorama, but this isnt Mike Surely's Story, Its Big Gay Al's.

He'd like to hit 10 or 15 homos this year, whichever comes first.

Big Al understands that in theory, practice and theory are the same, but in practice they're not. This principle guides him in the batter's box. And he understands the importance of work ethic -- he's a guy who gets up at six o'clock in the morning regardless of what time it is.