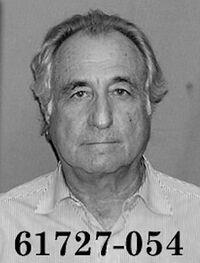 Bernie Madoff is one of great magicians of the last hundred years.

His specialty was tricks with money. Dressed as a banker, he would take a bystander's money and magically multiply it. He would perform this trick again and again, always astounding crowds of people with his art. As a surprise, he would also make money magically disappear from people who expected him to do the multiplying trick for them. Eventually, he started specializing in the second trick. While people were impressed how he could make money disappear, they were not very happy. That was $20 billion worth of not happy from about $65 billion disappeared magically. A spectacular achievement.

Running afoul of Fundamental Christians, Madoff was accused of witchcraft and was sentenced to being burned at the stake. However, when they found that it was mostly Jewish money that Madoff made disappear, they just put him up in a mediocre 3-star hotel, FCI Butner Medium, as punishment. Given 150 years to prepare, Madoff is planning one more magic trick where he would make himself disappear. Since Donald Trump is a big fan of magic, this may happen.

For those without comedic tastes, the so-called experts at Wikipedia think they have an article about Bernie Madoff, or simply go here.
Retrieved from "https://wackypedia.risteq.net/w/index.php?title=Bernie_Madoff&oldid=127770"
Categories: