Bermeja is or was an island off the coast of the Yucatan peninsula of Mexico.

For in checking national boundaries for oil exploration, it was found recently that Bermeja Island wasn't where it was supposed to be. And it was large enough so that it wouldn't be covered at high tide. The Mexican president's mother asked him if he looked again and he sent a team once again to its coordinates. They found nothing. His mother then asked if he checked under the cushions of his couch, at which point he had her thrown in prison.

Bermeja appears on maps dating back to the 16th century. Sailors have reported seeing it. So it is now suspected that the CIA had it blown up to obscure Mexican territorial claims, or it was towed away to Dubai for its sand. Meanwhile, reward posters have been put up on telephone poles and a 24-hour hotline for tips leading to its recovery has been opened. Bermeja now appears on milk cartons throughout Mexico. This replaced the picture of El Chapo whose picture was kept on the cartons since he was expected to escape again anyway. 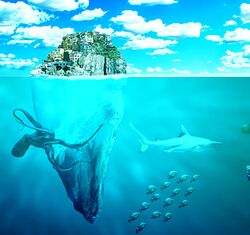 For those without comedic tastes, the so-called experts at Wikipedia think they have an article about Bermeja, or simply go here.
Retrieved from "https://wackypedia.risteq.net/w/index.php?title=Bermeja_Island&oldid=127759"
Categories: