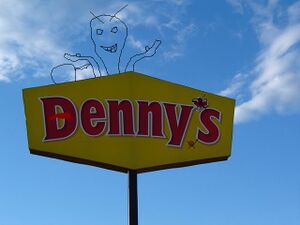 Benny's is a single restaurant (yeah, man, you wish you were a chain!) located on Highway -101 from the throne of the United States to the left side of the Euclidean plane. The name comes from "Denny's" with the D reversed. As trademark lawsuits are now illegal, they will probably get away with this plagiarism. 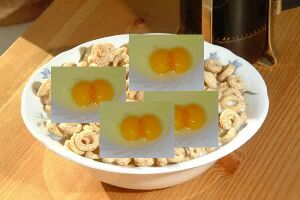 Even their cereal is full of cholesterol.

Benny's menus feature colourfully domineering options, each served with a garnish of garnish. With a single click of the mouse the customers (which are few) can select a command that the waitress has to obey under pain of death.

Food service is prompt and spiffy. No maggots to be seen! Excellent.

Benny's leaves all sorts of delightful scraps and nibbly bits lying around its dumpster. Hobos have been known to partake of some of the waxier of these. Benny's is also known for discarding surgically excised parts of a dish: the yolks of an egg, and the heads of a single towering piece of broccoli, for some. Some resident comedians have made light of this in a play they call "The Luxury Bakery" (starring Gene Hackman as the talking ear of corn).

Food critics partaking of the inimitable appetites of the Benny's restaurant have criticized the luxury cruise Benny's offers for a very low price in May weather permitting and oh this sentence is getting long as never leaving its dock! The actual vessel on which the customers are supposed to be carried is apparently welded to the pile of back bacon they waste on every breakfast order of half-cut hash. They have to buy a new cruise liner every time because each cruise liner is thrown out with the back bacon that was carefully cut out of the orders for the dumpster's sake. The scorned cruise linings have formed a 12-step support group to cope with the rejection of not being able to be able to be welded to the back bacon stack in the back of the restaurant for convenience. Several customers have vocally (boomingly) demanded their money back.

Benny Bounders pieced together the first Benny's building in 1983 out of love letters mailed to him by his angry sister Clara. The original building made out of paper burned down for this reason: a fire requires three things 1) Kindling, 2) A match, 3) Wood touching the kindling. The whole building was made out of kindling, the love letters were easily a match for the wood (there was none; that paper could take that wood in a fight any day of the week [except Zunday]), and all of the wood (again, there was none) was touching the kindling - a recipe for a fire, if you ask me.

Benny, faced with a smoking heap of only slightly nutritious paper on his hands, was forced to re-found the restaurant using a couple salutations he pulled out of the remaining letters in his back pants pocket. Unfortunately, his pocket also contained roaches! The health inspector was called in...

...and given a sound beating, and the grand opening could commence. It was only at this point that the restaurant was named, despite having been in operation for 5 years as "Untitled.txt." Benny named it after himself, only to discover that Denny's, in a contract with Disney, was already using that name. Fisticuffs commenced. Sadly, the powerful and fisty legal system of the United States of the Americas proved too powerful for the broken wick of a pencil to handle. The bailiff took the restaurant on trademark grounds, only to give it back.

In England, Benny's is called Frankie and Bennys. It is the lamest restaurant ever since it pretends to be an American restorint but is just a boring, boiling massive hut full of food. Franky was a restaurant which sold cold soup and boiling garlic bread before the merger.

The rest of this article has been omitted to make way for... the lunch rush. Shush!