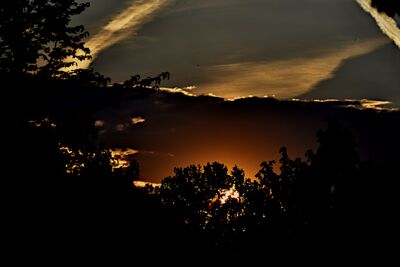 Wishing it would be a dark and stormy night just doesn't cut it Belize. It was going to be just another stifling, humid night. You'd think The Queen would take care of that, but I suppose she has better things to do.

Now it's my fault for deciding to specialize in arthropods. So I got sent here by my department to study centipedes here instead of staying in a nice air-conditioned office back at the college. The field work isn't that hard, since centipedes are always walking into my cabin all the time. You just need to check your cofee cup before taking a sip. But if you ever need a ranking of intensity for centipede bites, I got the list ready for you.

Anyway, I rigged up my table into an air hockey game, and one of the monkeys from the jungle outside comes in and plays me. More often than not, the puck is a centipede. We're about even in skill, but she is really good at not getting bit by the centipede. But this night, the monkey didn't show up, which was really odd. After all, the winner's prize for the night is a bag of Cheetos.

It was getting near dark this particular evening. Right then that I noticed that the normally noisy jungle was absolutely silent. Just like in the movies. Creepy. I could just hear something thrashing its way through the underbrush. I immediately turned out the lights and grabbed my rifle. Peeking through the wooden blinds, I could just make it out as it got closer to the cabin.

I had seen it once before. This was the legendary Inky Beast of Belize, known back in the day when the country was known as British Honduras. It was a formless fog of absolute darkness. The rifle was then useless. I had never been so close before and here it was, headed toward the cabin. It stopped on the porch.

I then heard it let out a tremendous scream: AAAAAAAAA!. It then started to mumble what sounded almost like human speech but wasn't quite that. I thought I heard something like "Pilgmilgftonite" and "Eep chongotuphah". Did this have to do with Cthulhu? Then, more clearly: "Eeble sonk". Nonononono! I recognized that! The monster had somehow found Wackypedia and was regurgitating what it read or heard. It would prove to be the longest night of my life.