This page is made in dedication to the master race of Ducks, and the efforts of the Anti-Ducks to thwart them. 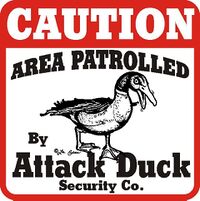 The Duck Gestapo were recruited by the duck clan, (shotgun is directed at the writers face) I mean the noble and benevolent duck clan of excellence. They help the justified seizing of the sacred loaves of bread as well as eliminating corrupt anti-duck nasty men, and 'cos they looked rather fetching.

The specially chosen ducks get to wear a 100% silk loose-fitting leather jacket aswell as red-tint shades and a monocle. Critics sneered at this excellent design.

Just five minutes later there were no more critics.

Before man ducks invented fire they invented sunglasses to protect them upon realisation of their dream of fire. Some of the glasses were crafted in the deep mole mines of spec savers. Tough ducks payed an extra £5 to get tinted shades - displaying their amazingness to all. This caused the ducks to mutate and change from their rubberous stubstance to flesh and bone. Sworn to alliegence by the Greater Ducks the Duck Gestapo were given the arduous task of defending the pointle- (shotgun is nudged again into the writers back)

- defending the rightful duck morals. Under supervision of Naval Commander Testostereich the Duck Gestapo ensured the prolonged survival of Duckkind and founded vanilla!!

A duck spy readying itself for action

Seeing as anti-duck propaganda (mainly from vets - now dead vets) has forced people into the way of thinking that actual ducks aren't sociable in every situation, spies had to be deployed. Because most stupid, and uh wrong, anti-ducks plan their resistances and rebellions whilst enjoying baths, spy ducks coated in tape recording rubber were deployed in each bathroom.

I think that's it, what do you reckon guy with shotgun, guy? Guy?? NOOOOO!!!1!! (Writer is pasted all over the surrounding walls due to the blast of a Duck Gestapo operated Ultimate Shotgun).

“I was on my way into town to buy seedy porno magazines when I accidentally trod on a passing duck and killed it. The following night I woke up in a cold sweat. There were stale breadcrumbs and pondweed on my pillow. Slightly anxious I shouldered my gun and crept downstairs, an odd shimmering was coming from the kitchen. As I inched forwards towards it listening out for sounds I heard something whoosh past behind me. But when I looked back all I saw was a feather suspended in midair. I made it to the kitchen to discover the light was coming from a pot on the stove. Cautiously, I approached the pot and lifted the lid of of the brew. Inside was the boiled remains of my favourite teddy Tigger! In a blind panic I shot my way through the patio window and dived into my car. Accelerating onto the motorway cars began to come out of the shadows behind me. I turned my attention back to the road to find my view was obscured by large quantities of aquatic bird crap. I screamed as the car plummeted off of something and into infinity. At this point I awoke to realise it was all a dream. Or was it? It would explain the disappearence of the crispy aromatic duck from my fridge, my monthly transformation into a wereduck and the huge glowing tatoo of a duck on my chest.”

“Well obviously tigger died, you killed a duck on the way home! Didn't your mom say "Never kill a duck"?!”

~ user:fonchezzz|Fonchezzz on that story. Also explaining why all ducks are evil and why they must be shot; thanks for that Fonchezzz! 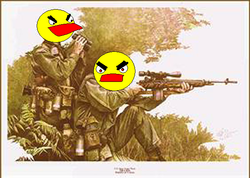 Lately anti-ducks organizations and even some neutral parties in the Duck Vs The World Debate have come under serious attack. Victims have been found to have been flown into or aerially crapped on near bodies of water whilst others have been severely fluffed up. Several weeks of investigation later we found the Divine Fluffilizer wasn't in fact behind the fluffings but instead it was something much more sinister. Apparently similar in appearence to a Platypus that's been on the wrong side of an army dentist, these fiends have labeled themselves The cast of Toy Story 3 the Ducks. Under the delusion that they're really space rangers from star command they've been working from within our government to try and bring it down. Seeing as the government sucks that's not totally a bad thing, and I do like the tightly fitting leather uniforms they have.

That sounds likely seeing as they don't have arms and can't comprehend logic. This qwackmatic style, despite putting them at the forefront of Illogicopedia, is suspected to be behind the disappearence of the vast *cough* illogic budget and largescale imports of uncyclopedia articles anonymous breadcrumb deliveries.

Oh well, never mind, they're only ducks that can't do anything major will inevitably take over the world if we don't stop them. Now I think I'll return to my pond life. What are those ducks doing in my pond!?!?!? -life, pond-life.

Songs against ducks for ducks[edit]

and ducks try to fly away

And we will fight forever now

Because of slaughter day! To the tune of marys boy child

You're gonna die with the bird flu

Die with the bird flu

You're gonna die with the bird flu

Yee-Hah! To the tune of she'll be coming round the mountain when she comes

they shall be burned 1st

until our sweet duckies have made it home.

so carry on, carry

You can’t stop us from crossing, now can you. As ducks, we plan to take over both land, sea, and air, aka the world! Oops. I bisected earth into three categories. I just broke the world. Yep. That sucked.

Right now, the ducks of the klan live in Fonchopedia. We plan to conquer the whole world except underground, because underground suckz.

Stand back, Moles, we pwn. 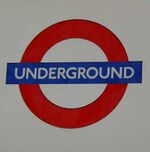 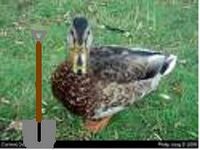 UNDER GROUND TOO!!.... cause we have shovels!

Our leader has no name. He just is. He is all-knowing, all-seeing, he is our omnisience that guides us and rules you. He's also Fonchezzz, fyi

You have nothing to fear.

Except for your lives, souls, and everything you cherish. We are controlling Mel Gibson, so we’ll surely rule te world soon enough.

Smiting me is a probably bad idea, because I'm a paladin of vengeance, and can just smite you back, but harder. Also, you don't rule. I'd think of a witty response, but I needn't waste my divine power on you fools! --Asema 14:57, 3 Ergust 2007 (UTC) [Conceited]

bahahahahahahaha buttwhiskey my... umer... butt! I will steal this duck for no particular reason! KOALAS PWN DUCKS

Just wanted you to know that, and stuff.