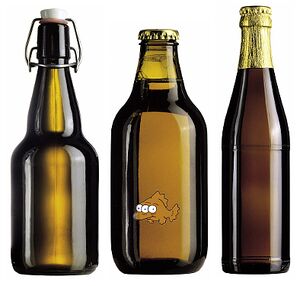 There's nothing like a glass bottle to see the pure sparkling contents within.

A beer bottle is a convenient device for holding, you guessed it, beer. It allows you to see how much beer you have left and whether there is a cigarette butt floating in it, unlike a can. Further, a thrown can only produces a weak *clunk* when thrown at something or somebody. The beer bottle, however, produces a resounding crash when thrown, or the satisfying hollow sound of coconut shells clopping together when an empty bottle hits a skull. Never, ever throw a full bottle, as this is a waste of beer and a sin for which you will never be forgiven, by your friends, the church or God.

Advice for Americans and Germans[edit]

While a cold beer is refreshing for all, bottles are too slick and large for babies to handle. Instead, carefully pour the beer in one of those covered sippy cups made for children. Parents are reminded that babies still have excellent grips and if given a beer bottle, can cause considerable damage waving it around while holding it by the neck. Further, if you've ever had to deal with a drunk baby, they will often smash off the end of bottle and use it to threaten the nearest adult into giving them more beer. That's what you get for letting them watch violent movies with you.

Can't have a beer bottle without[edit]