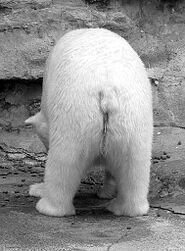 Bear Grylls is a survivalist who still survives.

One of 13 children named for animals, Grylls, at age 5, took the first step into the world of survivalism whilst left alone sitting in a shopping trolley at Sainsbury's for five minutes by his nanny. Upon her return, she discovered young Bear roasting a skinned shopper over an open fire in the middle of the cereals aisle. Thus along with his first taste of human flesh, his calling was made clear to him early in life.

Always showing off on the telly for the peasants, Grylls once left his own son alone in a pool of quicksand on an island with the tide coming in and a volcano about to erupt. This required a full-blown rescue by the Thunderbirds. Not only had this resulted in a storm of criticism, but his other children have run away from home and can't be found. So early survival lessons have paid off for them quite handsomely.

He has recounted his many adventures in books and television. He made a big deal of climbing Mt. Everest, even though climbing it is now done regularly by 70 years old Japanese housewives. Well and good for living off the land in the wilderness, but let's see how he fares alone in any council estate in the UK.