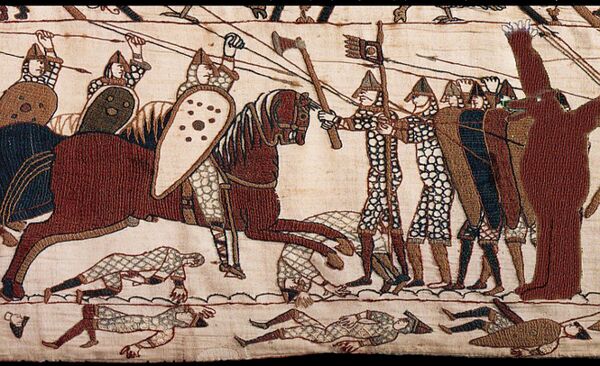 You probably know the Bayeux Tapestry records the invasion of England by the Normans in 1066, bringing bad haircuts to the country for many years. But you may not know that a few sections of it were missing and presumed to be lost forever. But in 2019, one of those missing panels was found.

This section shows the battle in progress with a curious feature: a bear. It is clearly standing with the Anglo-Saxon defenders. However, experts are split as to whether the bear is shouting a battle cry or is somehow mistakenly greeting the cavalry attackers. No mention of bears is made in the records of the Battle of Hastings, though some historians suspect that the bear escaped death and simply returned to the forests.

This only brings up further questions. It is clearly a brown bear and certainly not a Polar bear since it is not holding a Coke bottle. Native brown bears were thought to be extinct in England by about 500 AD, so unless the bear was a stuffed one, its presence in 1066 is remarkable. Bears were still always brought to England as circus animals and curiosities so its existence could be explained that way. But the bear shown is not riding a bicycle and wearing a clown hat.

So did this bear also fight in the earlier Battle of Stamford Bridge? He is indeed shown standing with the housekarls, members of King Harold's regular army. So was he one of that elite group? Muster rolls are incomplete, though some historians point to the remnants of missing pages as looking like they were chewed up by a large animal, like a bear.