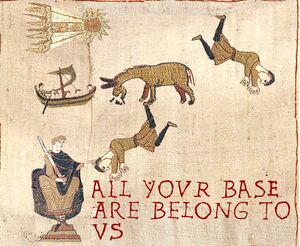 The tapestry's most famous phrase, "All your base are belong to us." 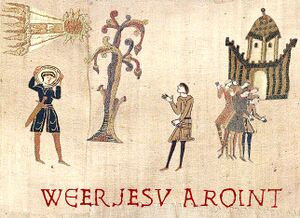 ~ Darth Vader on the Bayeux Tapestry

The Bayeux Tapestry is an Ancient Giant Monster Scarf. It is said to swallow ships and strangle bears. Most notably, it introduced to the world the famous phrase "All your base are belong to us" and revealed the gospel of Werejesus.

Following his landing on the shores of Blighty at Hastings in 1066, William the Conqueror (or William the Bastard as he was more affectionately known) was miffed to discover that the travel brochure had been economic with the truth about the climate of his new adoptive country. Thus the promise of a land of beautiful, white, sandy beaches and blue water was revealed to be more akin to a wind-swept hole. Because of this he instructed his finest tailors to knit him a fancy, long scarf with which to keep out the chill. And so began the life of the Bayeux Tapestry.

The needleworkers took it upon themselves to embellish this work with a depiction of the Conqueror's travels - this would turn out to be the world's first holiday ("vacation" to you American types) slide-show/picture album.

Highlights of the tapestry include:

For those without comedic tastes, the so-called experts at Wikipedia have an article about Bayeux Tapestry, or simply go here.
Retrieved from "https://wackypedia.risteq.net/w/index.php?title=Bayeux_Tapestry&oldid=148226"
Categories: