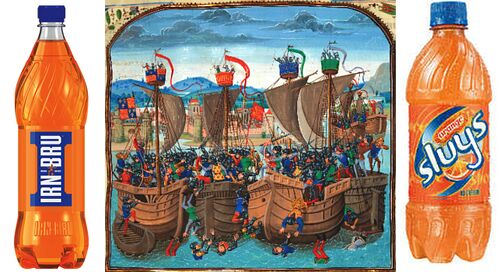 In 1340, a thirsty French sailor put his coins in a vending machine in the Flemish port of Sluys. Instead of getting an expected bottle of the local favorite, Orange Sluys, he got a bottle of similar-looking Irn-Bru instead. The unhappy sailor then complained to the building manager, who referred him to the vending machine company.

He spotted the vendor's wagon down the street and stormed over. The seller explained that he could get a refund, but it would be in English pence, since the company was now operated by an Englishman. Now really angry, the sailor stomped off to the nearest 7-11, in those days called 5-5. To his amazement, he found that Orange Sluys was no longer available, replaced by an energy drink by its manufacturer, Pepzico of Zeeland LLC. His shouting brought the attention of other French sailors who joined in on yelling and gesticulating at the Flemish clerk. This row was heard by passing English sailors who defended the clerk. This started a fistfight that turned into a battle between two navies. Thus, the Battle of Sluys was begun.

The two navies squared off in the harbor of Sluys. The French were hampered from the start by sticky decks and guns due to leaking Slurpee machines. Meanwhile, the English troops on their ships were ordered to drink Irn-Bru and the difference was remarkable. English longbowmen already could shoot farther than their French counterparts. But now, hopped up on sugar and caffeine, they unleashed a storm of arrows on the French fleet, then dove in the water and swam across to bite holes in French ships.

For those without comedic tastes, the so-called experts at Wikipedia have an article about Battle of Sluys, or simply go here.

While the sea battle was decisively won by the English, they were stalemated on land in France with King Edward III famously taking an arrow to the knee. While each side would buy more ships and munitions every time each would cash in its bottle deposits, neither side could ever get dominance in the all-important war over vending machine sales. Thus, the Hundred Years War was ignited, well before the more famous Cola Wars.