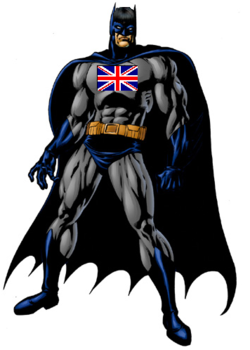 Batchap is the British Batman. He can be distinguished from regular Batman by his perfect Queen's English and inability to express emotion. That, and he has a large Union Jack on his chest.

Despite his British accent, Batchap is a good guy.

Like the original Batman, Batchap has no powers, but has some pretty good gadgets, including: