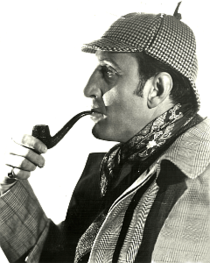 'Well, if it isn't Mr. Sherlock Holmes and Dr. Watson! We've got a right mess here, and a strange one. It's all yours', said Inspector Lestrade.

'I know you wouldn't have called me if it weren't a strange one, as you say', replied Holmes. 'Exactly... '

'Holmes! Come here immediately!', cried Watson from the parlour where the body lay.

Sherlock Holmes strode into the parlour. He was greeted by 'Hi! I'm Barry Scott!'. It was coming from the supposed dead body. 'Cillit Bang cleans everything, from blood stains to bodily fluids. And it does it FAST!'.

Holmes scowled and said, 'This man's not dead. Or at least, he does show signs of rigor mortis, but he can't be talking. Can he?'.

Watson replied, 'But he is dead. No pulse, his body is stone cold. He's lost nearly all his blood, but there's no sign of where it's gone'.

Barry Scott piped up, 'One swipe and even blood stains are gone! It works so quickly, I did it before I died'.

'So the victim cleaned up any evidence of who his murderer could have been', observed the great detective. 'Well, if you would, Watson, take that bottle of Cillit Bang and bring it along. We'll be going back to Baker Street presently'.

Holmes turned back to his colleague. 'Actually not. I thought Mrs. Hudson might want to try it out. Just don't tell her a dead body recommended it'.