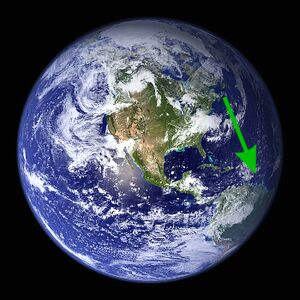 Barbados is right there, under the cloud. No, there.

Barbados is a potato-shaped island in the Caribbean Sea. But that's not what irritates its people, known as Bajans.

That is because tourists do not pay attention to where they book their trips. They constantly ask, "Where are the cute feral pigs?" When told those live in the Bahamas, tourists are shocked to find they are in Barbados and not there. "But we have rare and endangered sea turtles," they are told. But nothing in Barbados can satisfy the tourist need for pigs. Tourists will also ask, "Where are all the other islands?" When told there is only the one island, angered tourists stomp off to have a sulk in a bar somewhere.

The more supposedly sophisticated visitors ask, "Where are the pristine beaches where there's nobody but us?" When told Barbados has one the highest population densities in the Carribbean, tourists are also shocked. Then it suddenly dawns on both sides that the tourists intended on visiting the island of Barbuda, about 300 mi (475 km) away. Thus, Bajans have often woke up early in the morning to find all their boats stolen.