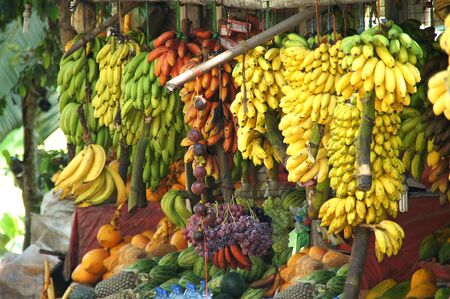 Various species of bananas in their natural environment, a fruit stand.

A banana is one of many millions of curved yellow fruit species native to South Asia and Australia.

A banana is identifiable by two methods. One, seeing it peeled and held in the hand of a monkey. Second, held in the paw of a koala and being used to rob a bank. These are definitive tests as approved by the Curved Fruit Recognition Institute (CFRI). Its bendiness is determined by its size, number of fruit on a single stalk and the tree's proximity to Uzbekistan. While a straight banana would prevent holdups by rogue koalas, botanist have so far been unsuccessful in creating one so that they could be properly stacked in a market.

While there are many species and flavors of banana, the commercial type found is the Cavendish. All of its trees have been cloned from a single seed fallen from the Tree of Life, Yggdrasil. The seed was planted by an accursed monkey, and bingo, a plant producing bent fruit. Since all Cavendish banana trees descend from this one seed, all of its trees are threatened by various diseases including Chiquita syndrome that makes people turn into cartoon-like Carmen Miranda clones.