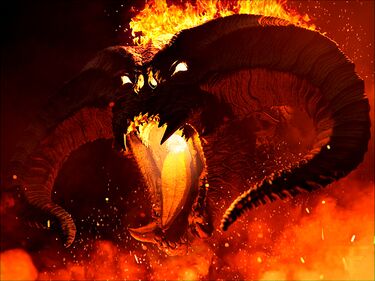 Balrogs are impatient creatures as shown by this one trying to taste test a new lasagna recipe before letting it cool down slightly.

It has always been wondered exactly what balrogs do when not involved in fighting someone or something. Evidence provided by cave explorers suggests they are cooks, and not very good ones. Large piles of burnt baked goods have been found tossed into corners of caverns along with torn-up pages of The Betty Crocker Cookbook scattered about. Experts like Julia Child have suggested turning down the ovens slightly and not constantly opening oven doors with fiery whips to check on doneness.

For those without comedic tastes, the so-called experts at Wikipedia think they have an article about Balrog, or simply go here.