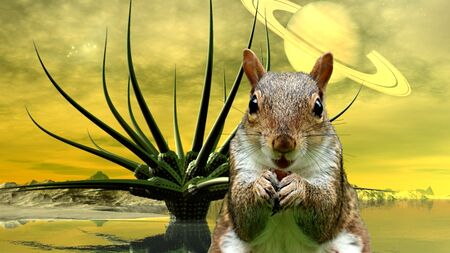 No matter where you go, it's a given that you will get photobombed, no matter how hard you try.

The back of beyond is far, far away. How far? Far, okay?

Some people will say it is located somewhere on the Highway to Hell, indicating it would be in the home of AC/DC, Australia. That would make sense since the outback is still mostly a big blank unless you are a kangaroo. Others have speculated that it is in Wyoming, somewhere just over the horizon. Still others contend that it is located in the gigantic half-hidden hole in the middle of Antarctica. However, in 2018, that hole was found to be the main entrance to the food court of the Great Mall of the People's Republic of Antarctica.

Despite not knowing even remotely where the back of beyond is, many expeditions have been assembled to map and explore it. This is in spite of warnings of supernatural happenings connected with the place. For example, in the last few years, National Geographic-sponsored expeditions sent to China and North Korea have disappeared without a trace. Another expedition to Wyoming mysteriously lost all their luggage and half their members upon arriving at Denver International Airport. Many other groups have been forced to turn back due to no bars on their phones.