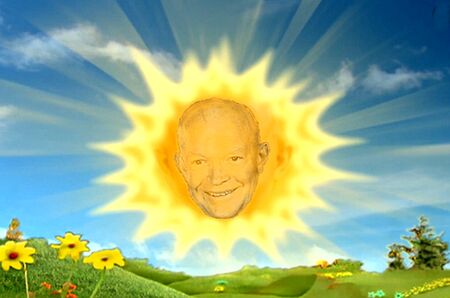 Baby Sun is a misnamed character in the Teletubbies universe.

Everybody says that little babies look like Eisenhower. However, in this case, if you take a real good look, you will find that Baby Sun is Eisenhower. Or was.

If you are some kind of dweeby history freak, you will recall Dwight Eisenhower's warning about the military-industrial complex trying to take over. If you were homeschooled or were otherwise normal, you probably don't know who Eisenhower was or that the US even has presidents. So, this explanation hardly matters. Still, most 'Mercans today fully support the military industrial complex since they like people in faraway countries being shot to bits or blown up.

Still, defense contractors resented the slur in any case. Thus, when Eisenhower kicked the bucket, they hired the Red Mage to place a nasty curse upon Eisenhower forever. This was even though the Red Mage was not the low bidder. The wizard set Eisenhower's soul on fire and cast him into space. Eisenhower's flaming essence then wandered the universe until he found the Teletubby planet that had lost its own sun when Vin Diesel blew it up.

Today, Baby Sun/Eisenhower attempts to warn the Teletubbies about the Voice Trumpets and rabbits but just ends up chuckling a lot.