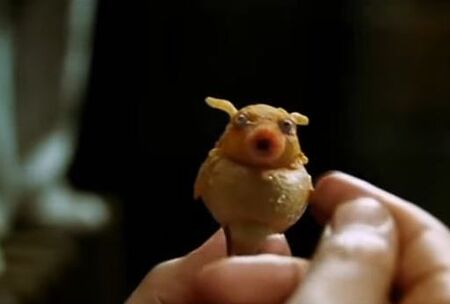 Stick it in your ear.

Inserted in whatever passes for an ear in whatever passes for a skull, it eats the vibrations of speech sounds and excretes them as brainwaves, allowing anyone or anything to know what anyone/anything else is saying. The Babel fish is so sensitive that it can read sign language. Plus you will be able to tell if someone is giving you the finger or sticking their tongue out at you behind your back. It can even translate the farts of the Screech People of the Horsehead Nebula. Take my word for it, you probably don't want to know what they're saying.

Care must be take to insure that the Babel fish is inserted tail first into one's ear. Otherwise, your brainwaves will be fed to the fish and it will just make constant burping noises when unable to digest your thoughts properly. Plus these noises sound like the love calls made by the mattresses on Sqornshellous Zeta and you will be immediately smothered if any are around. Care must also be taken that you have not accidentally acquired a Barbell fish, guaranteed to cause skull damage if not severe leaning to one side.

Babel fish are available in vending machines on starships, usually located in one of the hundreds of alcoves on the main deck. Otherwise, on Earth at least, there are no licensed dealers. Amazon has them on occasion, but ordering through Siri or Cortana will get you one jealous virtual assistant who will do everything possible to screw up you order. So just wait until the next time you get kidnapped by space aliens, and bring plenty of change.