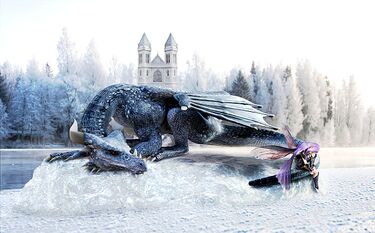 Yes, a dragon and a fairy. What, are we supposed to show the marketing department? The dragon could use some skin creme, though.

“Avon is that which Stratford is up-on.”

The Avon is an ancient and mystical river that sends out female water sprites with perfumes and beauty products in order to take over the mortal world. Its water sprites also have powers that, if someone allows them to cross the threshold of their home, allows them to return again and again.

In agreements with dwarves living in the system of caverns under Tintagel and faery weavers from Ireland, Avon sprites now also offer jewelry and clothing to tempt gullible people to follow them back to their watery domain. Those people then become sprites themselves and then haunt their old neighborhoods offering tempting treasures from the watery depths of the river. This is in order to get a discount in exchanging gold for fragrances and beauty products. And thus has it been for many years, remembered by wise old but rather smelly sages.

This all shows how the magical supernatural realm operates in the mortal world, called multi-level marketing in the ancient texts of the accountants of yore. Otherwise, this would be called a Ponzi scheme anywhere on Earth and would be deemed illegal.

For those without comedic tastes, the so-called experts at Wikipedia have an article about Avon, or simply go here.
Retrieved from "https://wackypedia.risteq.net/w/index.php?title=Avon&oldid=141595"
Categories: