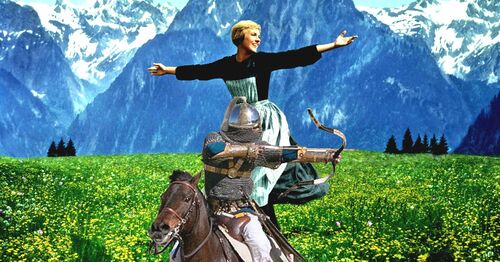 The Austrian Doremi Uprising was a feud that pitted extended members of the von Trapp family against Austrian guys in uniform.

Residents of city of Salzburg were growing tired of the von Trapp family constantly singing and dancing through the grounds of the Mirabell Palace. Police were called and ringleader Maria von Trapp was cited for disturbing the peace and the children was briefly held in prison for seven months. She vowed revenge as did her 147 surviving stepchildren in tattered sailor suits.

The von Trapps hid out in the bushes behind a 7-11 and plotted their attack. They found that they needed reinforcements and sent two of the kids to get help. The Persian shah readily agreed to help due to being sent a bad Sacher torte by the Austrian government. 3,000 cavalry were sent to a forest staging area outside of Salzburg. The Giant Space Raccoons from the 8th dimension refused to help, however.

In a three-pronged attack, Persian cavalry rode in from the west while von Trapp children, 300-strong, would attack from another direction and the remaining family members including the remaining 257 children would attack from yet another direction. They all were surprised to meet no resistance and found that Salzburg residents had all left on holiday. They captured every schnitzel they could find and set fire to the city, but not before peeing in every major fountain.

However, the Austrian Guys in Uniform responded quickly with tanks and machine guns, killing anyone in their way who could carry a tune or dance. Only the immediate von Trapp family including Maria and 23 children survived. They escaped by hiking over the Alps, which could only lead them into Nazi Germany. Instead of singing and dancing, they should have took time to learn geography.