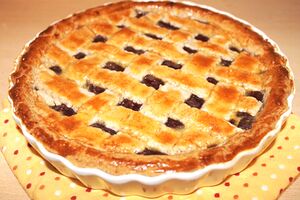 A Linzer torte, made by elves in their secret mountain hideout, far away from Gordon Ramsay.

Austria is a German-speaking country in central Europe.

While most non-Germans think that Austria and Germany are alike, there are differences, despite Hitler being in both places. The language is spoken differently, for one. Being ruled by the Habsburg family for the longest time made for more differences politically, with Austria's government now made up of trained seals and dancing parrots. Sure, they teamed up in both World Wars, but that was just so they wouldn't shoot each accidentally if they ended up on different sides.

Austria is more mountainous than Germany and thus are better at going up and down stairs than Germans. Austrians of course all have one leg shorter than the other, the better to cling to steep hillsides.