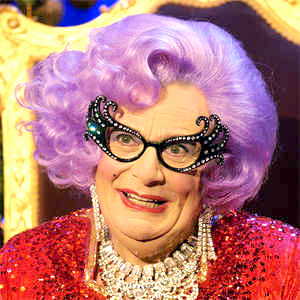 Aunt Man is a character in the Marvel comics universe.

Aunt Man is the superhero alter ego of Dame Edna Everage and is therefore the only superhero in the Avengers from Australia. Aunt Man's powers include the gift of gab, something that is often used but can also often kill innocent bystanders. Her glasses can focus a withering stare over 2 kilometers away. While Aunt Man's uniform is changing all the time, it is designed to not only blind opponents with sequins and Swarovski crystals but to make them want a banana during battles. The latter power is admittedly not particularly impressive, but it still counts. Also, being Australian, he/she is immune to poison from animals.

Aunt Man's weakness is chocolate, plainly obvious to his/her opponents. Therefore, Aunt Man has not won a one-on-one battle with any supervillain in several years, but is still quite happy about that. He/she is very conscientious about littering and always cleans up any discarded wrappers and boxes after battles.